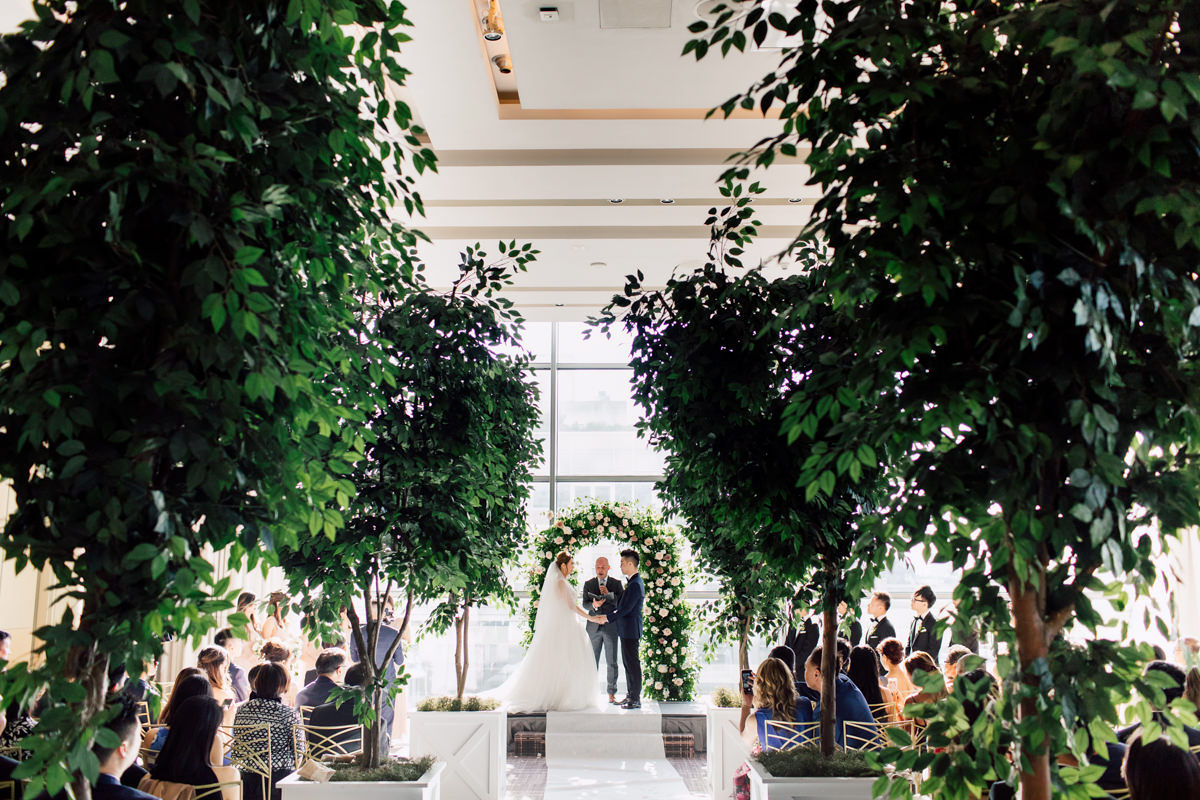 Inspired by outdoor weddings with flowers, trees, and natural lighting – yet comfortable for all of the guests, Jacqueline and Kenneth opted for a lush outdoor inspired wedding within the ballroom of The Four Seasons. With high ceilings that allowed the incorporation of trees and tall windows that let in plenty of natural light – it was an indoor garden celebration that brought nature to the city.

The day started with getting ready in their respective hotel rooms alongside their bridesmaids and groomsmen. As per their customs, the two changed into traditional Chinese garments, posed for pictures with family and received honorable gifts for their wedding day. Seeing each other for the first time was a magical moment for them both, and getting to share this important cultural moment with their friends and family there made it extra special.

Afterwards, Kenneth changed into his navy blue suit, while Jacqueline put on her lacy Crystal Design dress which flowed so beautifully behind her. She was a vision in white, and when Kenneth saw her for the first look, his jaw dropped. What would follow was their gorgeous outdoor themed ceremony, that transformed the space into an urban jungle.

Natural light poured in like a greenhouse, and the aisle was lined with lush potted trees that made the space feel more intimate. At the end of the aisle the newlyweds were led to a large archway of roses in front of the floor to ceiling windows, which looked like something straight out of a fairytale. Kenneth’s favourite moment of the day, he said, was “seeing Jacqueline being walked down the aisle with her Dad.” The way the light hit her face, she glowed like the brightest person in that room.

The two met when they were in highschool, hanging out with the same group of friends, but stopped seeing each other once they went off to University. Years later, while Kenneth was on his way to his first day at a new job, they bumped into each other on the GO Train – just by chance. They got to talking and updating each other on their lives, and well, the rest is now history.

The reception followed, and included a flower bar (so cute right?!) which dished out pink and white roses, on top of roses lining every tabletop. The neutral colour palette focused around white and gold accents, and combined with the subtle hints of pink from the flowers, left the room looking like something out of a fairytale.

The cake was a masterpiece in and of itself. It had three tiers, all delicately covered in light pink roses. Around the dessert table were other light pink and gold accented desserts, with exotic fruits and garnishes. When Jacqueline and Kenneth walked in the first time to see it all setup, they nearly fell over. It was even more beautiful than they could have imagined, seeing all of the elements that they carefully chose finally put together.

With the help of Rainbow Chan, they didn’t have to worry about a thing. “Thanks to our planner – Rainbow, I knew everything was going to be taken care of so I wasn’t particularly nervous.” said Jacqueline when asked about her nerves on the day of the wedding.

The afternoon carried on with emotional speeches from friends and family and tearing up the dance floor. The night was sent off with a collective toast, and sparklers that were lit around the couple while they shared a kiss.

It was a magical day, nothing short of stunning and fairytale-like. It was a joy to get to witness your special day Jacqueline and Kenneth. Here’s to many more celebrations for you two!


A few of our favourites from Sarah and Mark's perf

A sneak peak into Michelle and Brandon’s fairyta

A hint of luxury, a dash of romance, a pinch of st

This was one of the most perfect days for Courtney

We loved every moment of documenting this magical

When a celebration is so special, you need to make

After years of dreaming, planning, and finally mak

When Revi and Matt said "I do" they had only just

We can’t get over how beautiful, unique, and rom

When Brielle and Christian⁠ met, they knew they

A fairy-tale wedding for a gorgeous couple who kno

Here it is—the day Jennifer and Vincent have bee

Weddings are all about the details and what better

The exquisite day Sandra and Mina have always drea

A true vision of beauty and romance ✨🤍⁠
⁠

A fairytale moment for Cristina and Elias 💫💜

We’re completely in love with this oh-so-chic en

The beautiful details of a white modern pearl insp

The whimsical and modern wedding of Gina & Saif wa

Watch the romantic affairs of Christine and Michea

Tented weddings outside of the city always have a

Celebrating the amazing love of Allison and Nick,

The beautiful soft light romance of Abisola and St

The intimate fall wedding of Annie and Michael was

Angie and Ronel’s dream day was a mix of exquisi