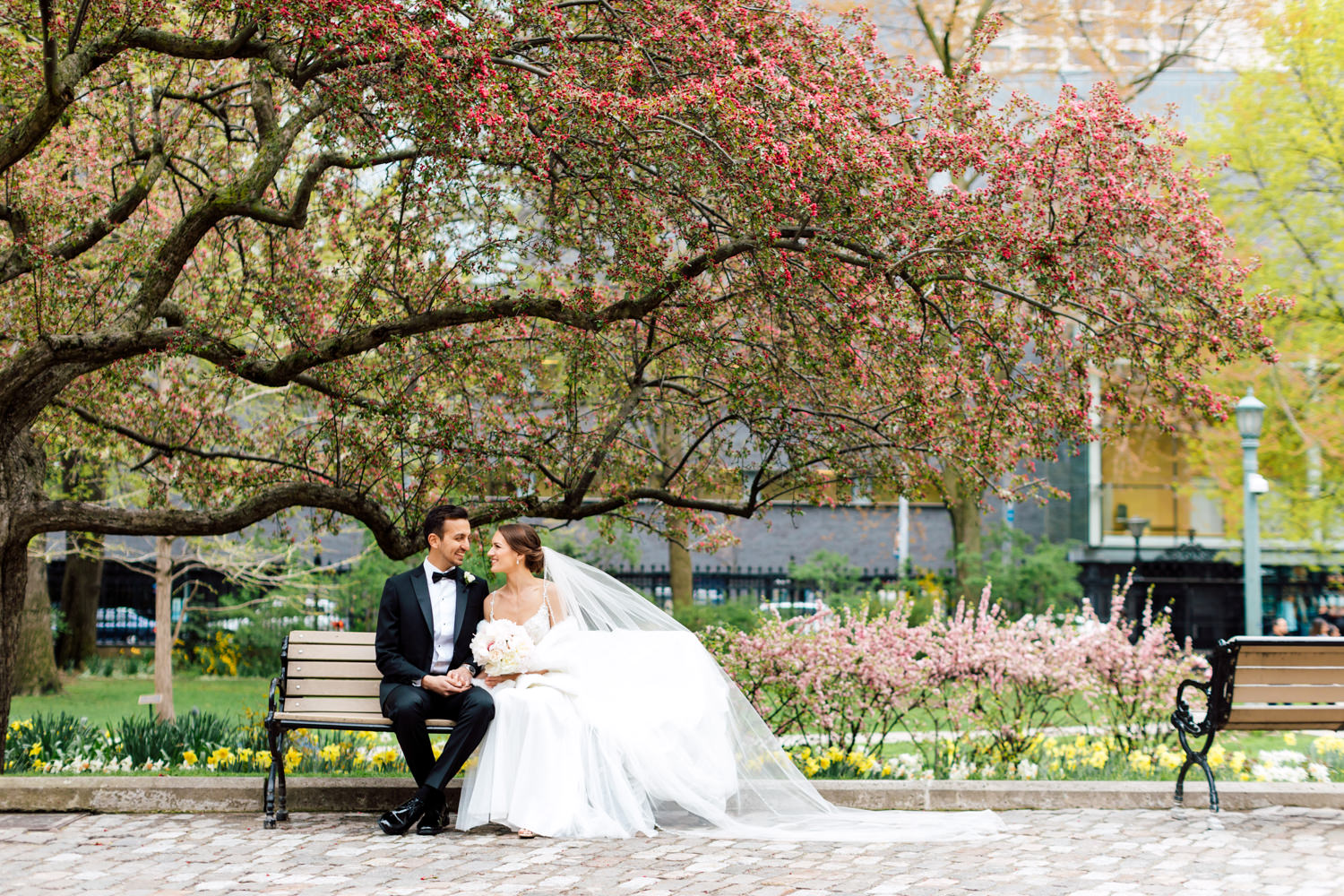 If you’re from Toronto, you know that the weather has always been unpredictable. For Emily & Hassan’s wedding, rain was to be expected on their special day that they have spent months planning. Global News even featured them with the headline: “Will heavy rainfall in the GTA spoil a wedding planned for Saturday?”. The answer? No way! After being apart for a few months leading up to the wedding, they were just excited to be reunited. It seems like the weather doesn’t matter when it’s always sunshine and rainbows when they’re together.

Emily started her day right by surrounding herself with her bridesmaids who knew exactly how to shoo the butterflies and bring in the fun. With their matching pink robes and personalized mugs, they were definitely the squad you want to be a part of. The photos reflect how much of a party it was in that bridal suite at the Hyatt. They had so much fun that they actually made Hassan wait a little longer to finally see his bride!

Hassan’s getting ready was a build up of anticipation to see Emily. He was up so early and prepared to start the day that Emily being slightly late felt like hours to him. But after finally seeing his bride in her beautiful white dress for the first time, the wait was definitely worth it. Emily looked like royalty in her Maggie Sottero gown. We love the delicate beaded lace that cascaded down from her sweetheart neckline. Even her spaghetti straps were beaded! The little details make this dress stand out.

For their bride and groom portraits, we decided to go to Osgoode Hall. With the continued threat of rainfall, this place has covered areas that can keep our couple dry! Of course, the architecture of Osgoode Hall perfectly matched the timeless look Emily and Hassan were going for. Emily admitted later on that she was excited about their portraits because most of the photos they have as a couple are only selfies! Whether or not you have a lot of pictures together, we hold importance to the bride and groom portraits ourselves because we know there won’t be another time for it! We always ask to allocate enough time to get everything you could ever want.

Although rain always presents a challenge to weddings, the couple and the vendors conquered it without a problem. If you get the chance to watch their Global News feature (found below), you can see how positive Emily, Hassan and wedding planner, Rebecca Chan, remained as they spoke about their plan B. From nice umbrellas as gifts to their bridal party to flip flops in case of puddles, they were ready to make the best out of the storm.

The central location of Malaparte is what makes this venue special. The terrace is the star of the show because it offers an amazing backdrop of the cityscape. Even when you’re indoors, the floor to ceiling windows won’t have you missing the views. The possibility of rain doesn’t stop it from being the perfect venue. The rooftop terrace can still be used since Malaparte sets up a tent (with crystal chandeliers!) that does not jeopardize the upscale elegance the venue offered. The tent acted as an extended room, being only steps away from inside.

In case you don’t remember that day – it didn’t even end up raining! We ended up taking advantage of the outdoors and took photos of the couple with their family and friends. Is there any Torontonian who doesn’t want the CN tower in the picture? If the rain holding off wasn’t magical enough, Emily and Hassan had their first dance on the rooftop terrace surrounded by their guests holding sparklers. Despite the unpredictable weather, there is no doubt that this happy couple would call their wedding day anything but perfect.

Once you’re done watching the Global News video below, head on over to EventSource! They fell in love with this wedding and featured it on their blog here.